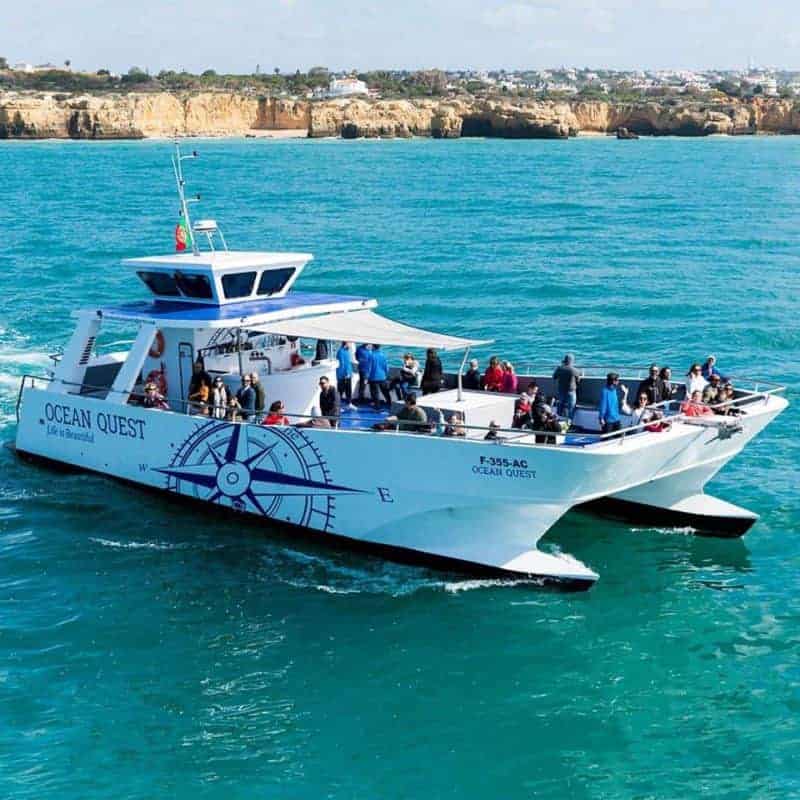 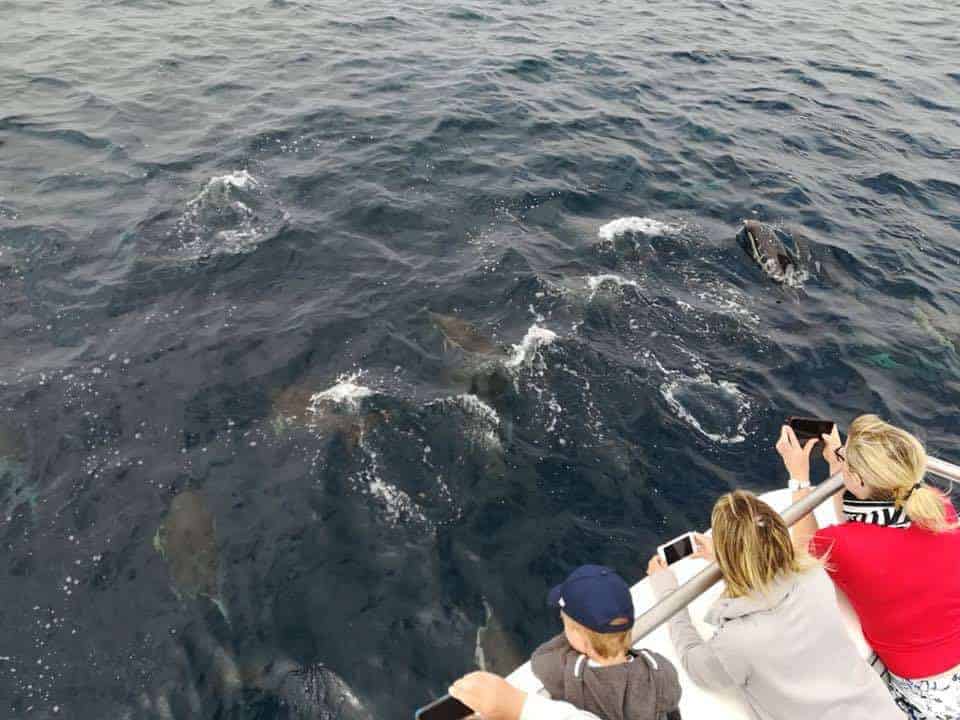 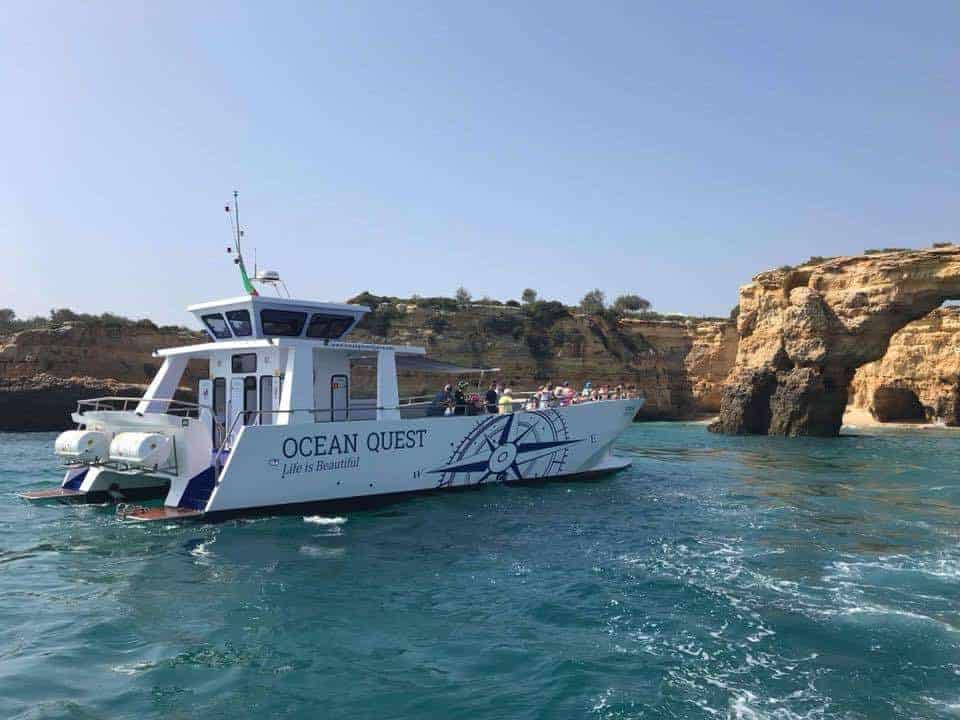 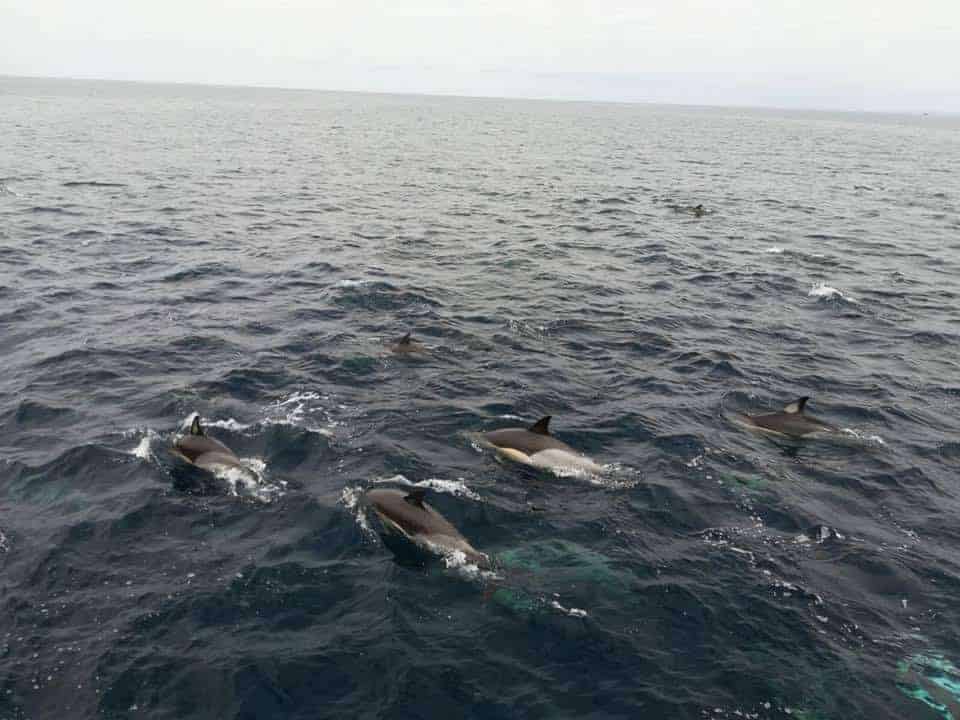 Best thing about this trip: A magnificent adventure to explore these waters to find these wonderful mammals in the wild.

Route: Our fully trained crew will assist in the search, providing expert information about the wonderful marine life found in our waters and along our coastline.
*Dolphins are wild animals we cannot guarantee 100% sightings, our 2018 statistics stand at 84%

Best thing about this boat: There is a big space with sofas.

The Algarve is the ideal place to see dolphins. These majestic sea creatures swim freely in the southern seas of Portugal. The Algarve has a resident population of common dolphins, which are usually found between 2 and 4 miles from the coast. Between April and September the region is visited by other cetaceans such as whales, killer whales and other species of dolphins. Many of these animals pass through the Algarve on their way to other territories, allowing the public to see them twice, one at the beginning of the heat period, when the migration occurs in one direction, and another in the end, when the migration occurs in the opposite direction. This means that it is quite common to spot whales or killer whales during boat trips to see dolphins – a truly incredible experience.

The dolphin boat trip from Vilamoura Marina usually requires that the passenger is present at the docks about half an hour before departure so that the crew can accommodate everyone on the boat. The catamaran I went on was brand new and had a wide area on the deck, with space and sofas for people to sit and from where you can see the sea. Speakers installed along the boat play smoothing music that entertains the passengers while the preparations for the trip are finished. At the back of the boats are the bathrooms.

These types of boat trips always start in the same way: the captain presents the respective vessel to the passengers and tries to review the safety procedures to be adopted in the event of any unforeseen situation. The Portuguese legislation is very firm and demands that boats that organize these kind of trips comply with strict safety standards which is why the catamaran I went on was equipped with lifeboats and lifejackets.

Some of the tours to see dolphins include a marine biologist on board as part of the crew. To make sure that passengers recognize the various cetaceans that can be found in the waters of the Algarve, most marine biologists carry a poster showing the large marine species that are usually seen on boat trips. In addition, marine biologists are available to answer any questions that may arise.

Although the best time to find dolphins is between April and September, there is no guarantee that you will be able to spot these magnificent creatures during this time. Unfortunately, even if the conditions are perfect, sometimes you are unable to see dolphins, which still does not take away the magnificent beauty of the Algarve coast. It is for these reasons that passengers are often asked to pay attention to the marvellous blue sea, where Fernando Pessoa, the famous Portuguese poet, claimed that God mirrored the sky. Although finding dolphins on the extensive coast of the Algarve may seem like an impossible task for a single boat, the truth is that all vessels that carry out similar voyages help each other in the sense that there is a constant dialogue between them regarding the location of pods of dolphins. One of the most common tricks to find these cetaceans is to identify shoals of tunas or sardines, since dolphins, whales and orcas follow these kinds of fish to feed themselves. Often birds like seagulls help to track down these shoals since they are also looking for food, meaning that it is quite common to see birds feeding on the same spot as dolphins.

But when you do get to see dolphins it is such an incredible moment and you will be filled with such adrenaline that you will wish to relive it forever. After 45 minutes sailing the coast, passing by Falésia Beach, Oura Beach (the famous beach in Albufeira where there is a massive New Year’s Party) and the area of Galé, we were finally able to spot Bottlenose dolphins less than one mile off the coast of Armação de Pêra. Because dolphins are curious animals, they usually approach ships, swimming around them and jumping out of water. The agility with which they swim and the raw strength that allows them to jump out of water makes passengers feel like they are truly witnessing one of nature’s most precious wonders. While it is possible to see dolphins in aquariums or even in the Zoomarine theme park, there is no sensation like that of seeing them in their natural habitat. We assure you that this is an experience you will never forget.

Between April and September is also the season of mating, which brings together more dolphins (and whales and killer whales) than normal. There are reports of boat trips in which there were seen 400 common dolphins at the same time.

If there is time, after seeing dolphins, it is still possible to make a quick visit to one or more caves on the west coast of the Algarve. In my case, I still had time to visit one of the caves that surround the Beach of São Rafael.

If you are planning on going on a dolphin boat ride, make sure to book it in advance as most trips tend to be fully booked more than 1 week in advance. As well as this trip Algarve Fun have lots of other great Vilamoura boat trips, so make sure to check them out as well.

Departing from Vilamoura this is a chance to see dolphins and other marine wildlife in its natural habitat. Its sure to be an unforgettable trip.

This brand new (2018) catamaran provides the perfect setting for a cruise you won’t forget. The legal capacity is 115, however the captain has taken the decision to limit this to 100 to ensure the maximum comfort and space for passengers. The boat is well equipped with high quality facilities, a bar and toilets. 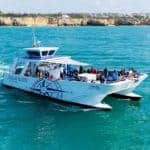 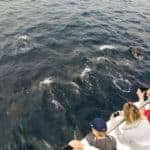 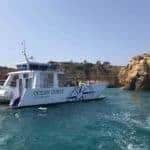 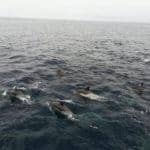 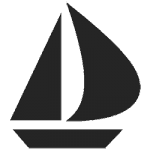